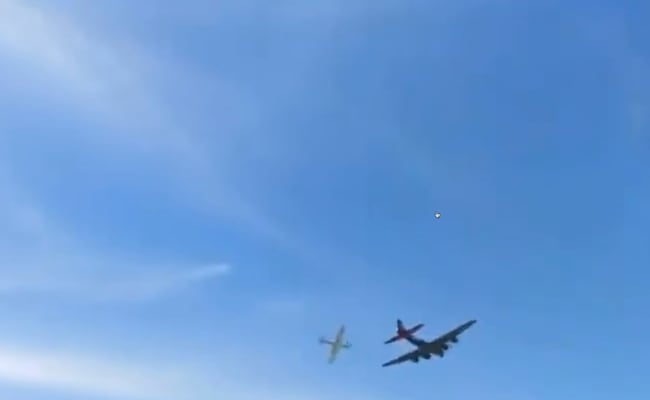 During the airshow in Dallas, USA, two fighter planes collided with each other.

Two planes, a Boeing B-17 bomber and a small plane, collided in the air on Saturday during an air show in Dallas, US. Both those aircraft immediately fell to the ground and exploded in the form of balls of fire. The US Federal Aviation Administration (FAA) has been quoted as saying that the condition of the pilots of both the planes is not yet clear.

Video captured by airshow participants shows a large B-17 bomber in flight. He is not very high above the ground and is flying in a straight line. Whereas a small aircraft Bell P-63 Kingcobra, changing its direction, comes from the left and collides directly with the bomber and is cut into pieces.

After this collision, the World War II-era bomber B-17 falls straight down and within a few seconds it turns into a ball of fire.

The Associated Press reported that the incident occurred during the Dallas show of the Air Force’s Memorial Wings. It has been said that the FAA and the National Transportation Safety Board have started an investigation into the incident.

The four-engined B-17 bomber played a major role in winning the air battle against Germany in World War II. With a workhorse reputation, it is one of the most produced bombers of all time. The P-63 Kingcobra was a fighter aircraft developed by Bell Aircraft during the same war. The Soviet Air Force also used it in war.

One of the last major B-17 crashes occurred on 2 October 2019, when seven people died in an airport crash in Windsor Locks, Connecticut.

(with input to AFP)

Featured Video Of The Day