I was awarded the Nazi Iron Cross. It was handed to me personally in June, in a red velvet pouch in a bar in France. The long journey in my hands involved many twists of fate, random coincidences, and encounters with strangers who later became friends. And God knows what my late father would have thought – he was a Commando on D-Day.

Before it was handed to me, I had only seen the infamous black medal with the embossed swastika in movies and documentaries. I certainly had never held one before. How it got into my hands taught me a lot about history and also about remembering.

The Iron Cross – or ‘Eisernes Kreuz’ – was a decoration for bravery first awarded for merit in Prussia in the 19th century. Thousands were presented during the Nazi era. My Eisernes Kreuz is dated 1939, when Hitler issued his version of the historic gallantry award in the invasion of Poland.

Here’s what I know about “my” crotch. It was awarded to Theodor Baas, a 19-year-old gunner in an armored tank division. He was one of the German troops who occupied France and fought the Allies in the savage three-month Battle of Normandy that followed the landings in June 1944.

He clearly wanted me to get the Iron Cross as I am the son of a British veteran. Captain Guy O’Connell was only 22 when he landed in Normandy on Gold Beach in June 1944 with the Royal Marines

Tens of thousands of soldiers lost their lives and entire French cities were razed to the ground by the firepower of both sides.

Bass bitterly regretted his role in Hitler’s murder and destruction. Friends had died beside him; his enemies all around perished in airplanes, in armored vehicles and face-to-face, also yards away.

But he still fought until the last weeks of the war, when German resistance to the Allied advance took Western war leaders by surprise.

He found himself in dense forest in the Belgian Ardennes, during the Battle of the Bulge – the last major enemy offensive on the Western Front – before finally being captured by the Americans.

As the years wore on, this gunman, who had been rewarded for bravery by the Nazi regime, discovered that his nightmares never stopped. From a distance, the murder had seemed anonymous. He operated an anti-aircraft gun. But at night he saw up close the faces of his friends and his enemies in the moments before their deaths.

I know this because the 79-year-old Bass wrote a letter to his former enemies in 2004 describing the sickening scenes of exploding planes and tanks and of close combat.

“We thought then that we had to defend our homeland against the Allies,” he wrote. “Years later, we recognized that we had been deceived by our political leaders.”

He wanted his words to be widely disseminated, as he himself could not travel to France due to his declining health. He wrote: ‘I have come to this beautiful country as an enemy. I would have loved to come back as a friend.’ But he never did.

He’s long dead now. Years have passed since he wrote that letter. Now the story of his Iron Cross has been passed on to me. The historic medal was presented by another German ex-serviceman, his son Juergen, a former lieutenant in the Luftwaffe. 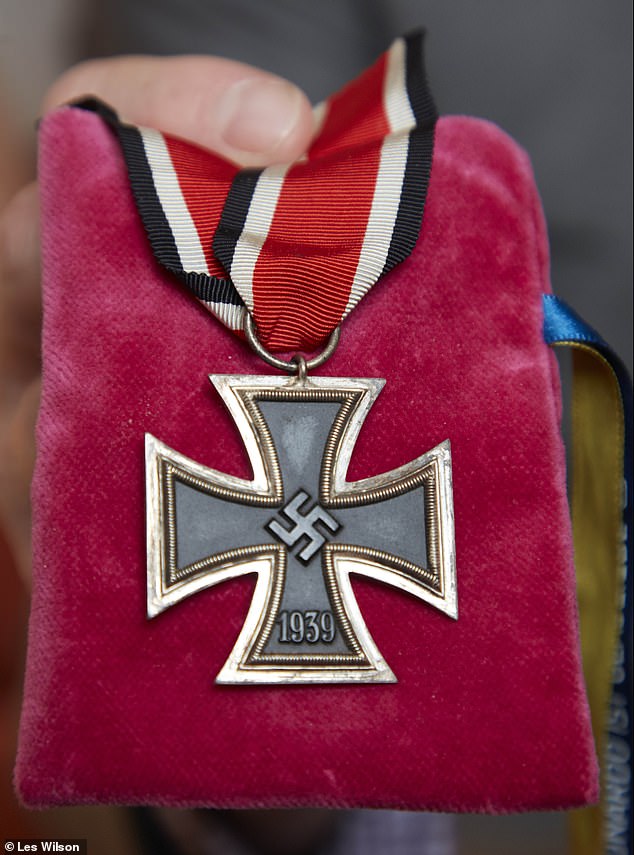 The Iron Cross – or ‘Eisernes Kreuz’ – was a decoration for bravery first awarded for merit in Prussia in the 19th century. Thousands were presented during the Nazi era. Pictured: Paddy O’Connell with the Iron Cros

It happened this summer, when I was in a bar in Normandy traveling with the few D-Day veterans still alive, along with their friends, families and current soldiers.

“What’s in this?” I asked, as Juergen pushed the small purse-like bag toward me. I got to know him very well over the years as we were both welcomed by the same group of veterans.

He was born long after the war and served in NATO alongside British troops. He is now retired and often travels to the commemorations on the French coast.

We met often, and once he gave a speech to British veterans telling them what the defeat of the Nazi fascists meant: ‘You defeated my father – but you set me free.’

While I was standing there in a bar full of French, British, Belgian and Dutch friends in June, a young Royal Marine was playing the bagpipes in the street. The commemorations were behind us and we had watched with pride as the few surviving veterans saluted the comrades who traveled to France in 1944 and never returned home. We would all soon say goodbye and go back to Portsmouth.

Juergen had chosen this moment to make his grand gesture. I was pretty sure his eyes were filling when he said, ‘It’s for you. Look.’

Inside was an iron cross with a swastika in the center. The Americans had confiscated the original, but this was the authentic replacement, a memorial to Juergen of his father’s bravery.

Why would a man give such a thing away? He clearly wanted me to get the Iron Cross as I am the son of a British veteran.

Captain Guy O’Connell was only 22 when he landed in Normandy on Gold Beach in June 1944 with the Royal Marines. Days earlier, he had joined history’s largest armada that had secretly formed in the seas off Southampton. Around him stood tens of thousands of young men – the Allies whose job was to land in France and then fight through the destruction and slaughter in Europe until the end of the war.

Captain O’Connell would command a small troop of 30 men, specialists in mortar and machine gun firing, in Nazi-occupied Europe.

He died in the 1970s when I was eleven, without speaking to me about the war. Maybe he thought it wasn’t a child’s business. I remember my mom buying me a pair of shoes called Clarks Commandos with a badge to wear on your jersey and a compass in the heel. It was a smart way to get a little boy to wear smart shoes.

I wore that commando badge with glee, but my father never said a word that he was the real deal, having been given the famous green beret from the Marines after training at Achnacarry in the Scottish Highlands — or Castle Commando, as it is. would be known later.

In 1940, Winston Churchill had ordered the creation of a combat unit of ‘specially trained fighter-class troops’. They were all volunteers from other regiments, as I discovered years later when I was researching my father’s life.

In addition to the story of his wartime service, I met his surviving comrades and began traveling with them and their families and friends to memorial events. I have walked the cemeteries with them and heard them say aloud, ‘They shall not grow old, as we who remain grow old. When the sun goes down, and in the morning, we will remember them.’ 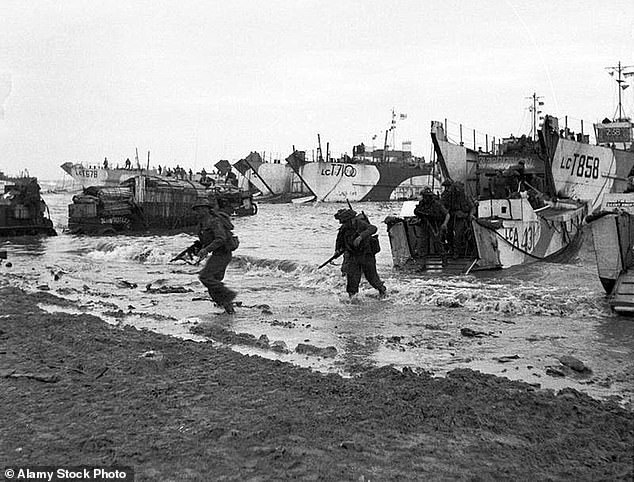 Captain Guy O’Connell was only 22 when he landed in Normandy on Gold Beach in June 1944 with the Royal Marines. Pictured: British troops land at Gold Beach on D-Day

But I’ve also heard the stories behind the names on the tombstones. “Our landing craft was hit. I saw the big dive from the sinking bow. He was found washed up on the shore. This is his final resting place.’

Like many proud sons and daughters – including thousands of readers of The Mail on Sunday – I have my father’s medals among my precious possessions.

I don’t think he ever wore them. He stuffed them into the same Player’s Navy Cut cigarette can that his father—my grandfather—had used to store his World War I medals.

The piece of paper that came with the box they came in the mail is still crumpled so tightly it looks like it’s only been read once.

So in addition to these family heirlooms, I now have another World War II medal – one from the enemy side.

I’m sure it should end up in better hands than mine after that. I won’t keep it long. Starting today, I’m going to try to use it to raise charitable funds for the Royal Marines. It seems to tell a Remembrance Sunday story.

A new king will lead the commemoration of the dead of all wars. There is a new threat in Europe and Vladimir Putin has become the last strongman to bomb children in the name of nationalism.

So what can one enemy medal tell us when we honor those who fought for freedom on our behalf?

Somehow the tiny piece of metal proves how few people like me, who have never fought in uniform or been a civilian trapped in a deadly war zone, will ever understand conflict. The people who wage wars keep telling the rest of us to stop them.

Perhaps there is one word that explains the long journey of this Iron Cross, a word as powerful as war, but all too often taken for granted. If I had to think of the motive for a son handing over an old medal, I’d say the word… is peace.

The fee for this article was donated to the Royal Marines Charity (rma-trmc.org). You can text Royal to 70470 to donate £5 to this cause. Join Paddy O’Connell live at the Cenotaph today on UKTN Radio 4 at 10:30am.