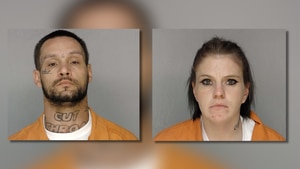 A woman accused of sending drugs to prison is now behind bars herself.

Delegates from the Bibb County Sheriff’s Office conducted the investigation between Nov. 3 and 10.

During the seven-day investigation, officers heard through phone calls Amber Leigh Abney, 31, from Macon and inmate James Douglas Adkins, 34, about her drug mailing to him.

On Nov. 10, Deputies and U.S. Marshals executed a search warrant at Abney’s home at 3300 block of Fairburn Avenue.

Abney was arrested at her home and taken to the Bibb County Jail.

She faces two charges of using communications facilities while committing a crime, possession of marijuana, three charges of conspiracy to violate the Georgia Controlled Substance Act, possession of Schedule I drugs, and criminal activity by street gangs. She is held on a bond of $11,860.

Adkins, who was already in the Bibb County jail on unrelated charges, is now charged with two counts of attempt or conspiracy to violate the Georgia Controlled Substance Act, two counts of using communications facilities while committing felony and criminal street gang activities. He is being held without a bond.

Anyone with information on this case is urged to call the Bibb County Sheriff’s Office at 478-751-7500.