Harry Kane was denied a dramatic last-minute winner against Sporting Lisbon that would have sent Tottenham into the last 16 of the Champions League after a lengthy VAR check ruled out his goal for offside.

Kane fired home from Emerson Royal’s header to spark wild celebrations but VAR adjudged the England captain to be in an offside position to see the match finish 1-1 as Spurs boss Antonio Conte was sent off for his protestations over the decision.

Can you be offside from a backwards pass?

Yes. If the ball is passed backwards but the receiving player is ahead of the ball when it is played, they can still be offside upon receiving it. In this case, because the deflection that took the ball into Kane’s path is not considered a deliberate play, Kane’s offside position was not reset. Rarely seen, and a painful one, but despite Spurs’ protestations – Eric Dier shouted “The ball went backwards!” to officials after the game – this was done by the book.

The fuming Italian said afterwards: “I think there are moments where you can understand you have just disallowed a regular goal because the ball is in front of Kane.

“I think it creates a big damage. I’d like to see this type of decision with a top team in an important game, I’d like to see if the VAR is so brave to take this decision, an unfair decision because the ball is in front of Kane.”

The draw keeps Tottenham top of Group D but leaves their Champions League last 16 qualification hopes in the balance, with Conte’s side needing a draw at Marseille on Tuesday to send them through.

Tottenham went into the game knowing a win would have guaranteed them a place in the knockout stages but they started badly as Edwards came back to haunt them.

The Englishman, who left Spurs after 13 years at the club in September 2019 but only made one senior appearance, scored a fine first-half opener as he played a neat one-two with Paulinho and then fired into the bottom corner from around 25 yards.

Conte’s side failed to muster any real chances as they were booed off at half-time, just like on Sunday in the 2-1 defeat against Newcastle.

Tottenham upped their game in the second half but only levelled with 10 minutes left as Bentancur headed home Ivan Perisic’s corner.

Eric Dier then missed two late chances to score a winner against his former club as he glanced both wide with his head, while Bentancur put one over in stoppage time.

But with the last kick of the game Kane dramatically thought he had won it for Spurs only for a lengthy VAR check to deny him and send Conte apoplectic on the sidelines, with the Italian given a red card.

Tottenham, who have a poor away record in Europe in recent seasons, must now go to Marseille next week and get at least a draw if they are to qualify for the last 16. 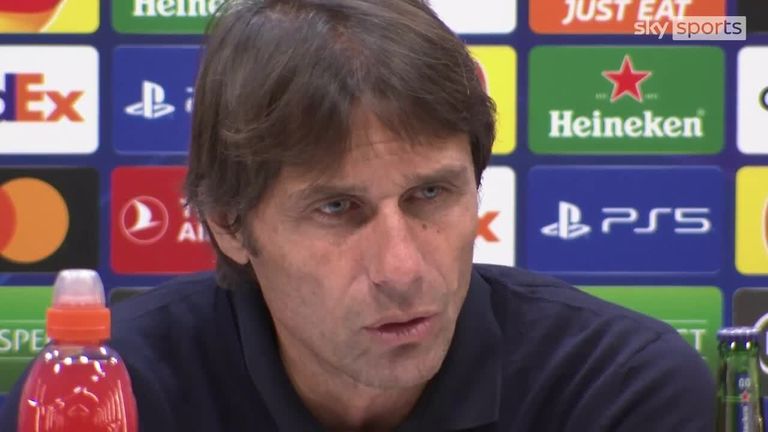 Antonio Conte was left fuming with VAR following Tottenham’s 1-1 draw with Sporting Lisbon in the Champions League and left the post-match press conference after just one question.

“All the people came onto the pitch and then the referee decided to send me off.

“I think there are moments where you can understand you have just disallowed a regular goal because the ball is in front of Kane.

“You know that I don’t comment on the referee’s decision but the VAR this season in the Premier League and the Champions League, we are not so lucky.

“I think it creates a big damage. I’d like to see this type of decision with a top team in an important game, I’d like to see if the VAR is so brave to take this decision, I repeat an unfair decision because the ball is in front of Kane.

“For the game, I think we played the first half with low intensity and Sporting Lisbon deserved to stay 1-0 up. At the end of the game after our second half I think we deserved to get three points. But now for this decision we have to wait for the last game against Marseille.

“I repeat, this decision creates a big damage. I hope the club understands this and then in the right situation to speak with the people that they have to speak to, otherwise it’s only the manager that speaks.

“I think the club must be strong because this situation has created a big, big damage. Now we don’t know what happens next week and if we go out then I want to see.”

Tottenham travel to Bournemouth in the Premier League on Saturday; kick-off 3pm. Their final Champions League group stage match is a trip to Marseille on Tuesday.

Sporting Lisbon will play Arouca in the Primeira Liga on Saturday before welcoming Eintracht Frankfurt in the Champions League on Tuesday.