Q: During a cold snap last winter, my neighbor’s pipes froze and burst, causing damage to their home and belongings. I’m worried my pipes may freeze if it gets that cold again this winter. Does homeowners insurance cover frozen pipes?

Knowing the answer to the question of “Does house insurance cover frozen pipes?” can help homeowners know what to expect when filing an insurance claim. Homeowners can also reduce their risk of frozen pipes by learning how to properly insulate plumbing and winterize their homes.

Frozen pipes may be covered by homeowners insurance if caused by a sudden and accidental incident.

The phrase “sudden and accidental” is the most important part of the answer to the question “Are broken pipes from freezing covered by insurance?” Sudden and accidental damage means the pipes burst despite proper maintenance and care. Insurance companies require homeowners to keep their homes in good condition, and this includes taking reasonable steps to keep pipes from freezing.

For example, a homeowner may go on vacation and set their thermostat to 60 degrees Fahrenheit to prevent frozen pipes. Despite these precautions, the pipes freeze and burst while they’re away. Their homeowners insurance policy will likely cover the water damage caused by the frozen pipes bursting.

On the other hand, a negligent homeowner will likely have their claim denied. If a homeowner fails to replace corroded pipes or insulate their plumbing for winter and a pipe freezes and bursts, their insurance company could deny the claim due to negligence or a lack of maintenance. 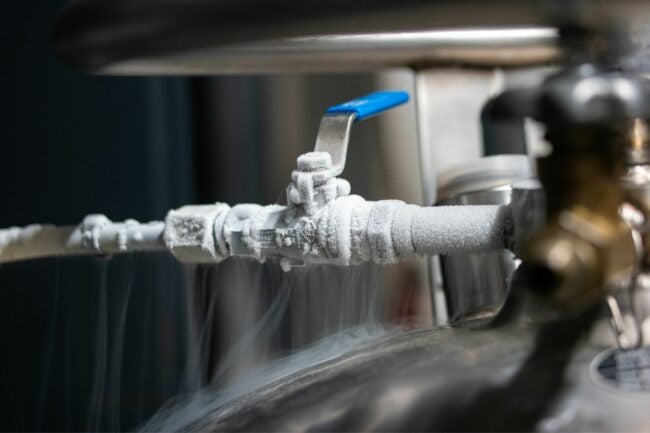 Homeowners insurance generally won’t provide coverage to repair the pipes, but it may cover the resulting water damage.

The answer to the question “Does home insurance cover busted pipes?” is usually no. House insurance generally only covers damage from the water that escapes a burst pipe. It doesn’t cover the cost to repair the broken plumbing. Homeowners may have to pay a plumber out of pocket to repair the pipes.

However, the answer to the question “Does homeowners insurance cover water damage from frozen pipes?” is often yes. Homeowners can usually file a claim if the sudden burst of water causes damage to their home or property. The dwelling coverage portion of a basic homeowners policy generally includes the cost to repair or replace structural components of a home in a covered incident. For example, if a frozen pipe bursts, causing extensive damage to a homeowner’s carpeting and subflooring, the homeowners insurance policy is likely to cover the cost of replacing the floors, but not the pipe itself. 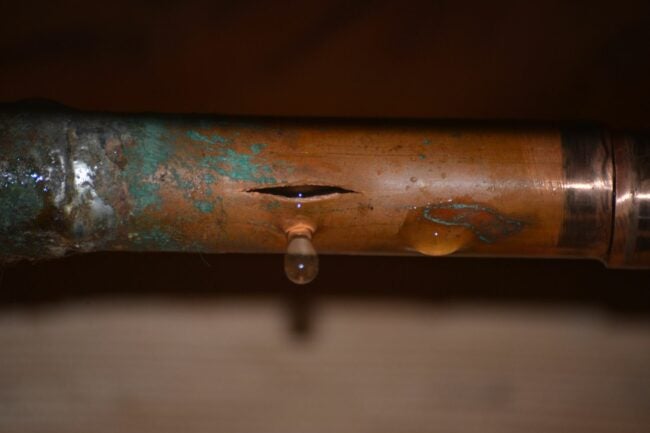 Personal property coverage can help repair or replace belongings that have been damaged by a frozen pipe bursting.

Personal property coverage comes with certain limits. Homeowners who have fine jewelry or expensive art may need additional coverage to protect these items from water damage. Adding these endorsements usually increases the cost of homeowners insurance, but the extra protection is recommended for homeowners who have valuable items in their home.

Loss of use coverage can help pay for additional living expenses if the homeowner needs to temporarily move out while repairs are being made to the home.

Water damage to the structure of a home can make it unlivable. For instance, moisture from a burst pipe can cause mold to grow in the carpet or between walls. Likewise, standing water near electrical outlets and appliances can create an electrocution hazard. Homeowners may have to find a temporary place to live while crews repair the damage to their home.

Most homeowners insurance policies include loss of use coverage. This helpful coverage reimburses homeowners for additional living expenses if they have to temporarily relocate. For example, insurance might reimburse the homeowner for the cost of a hotel while a restoration company removes standing water from a pipe bursting. It might also reimburse them partially for restaurant meals that exceed the cost of meals at home. 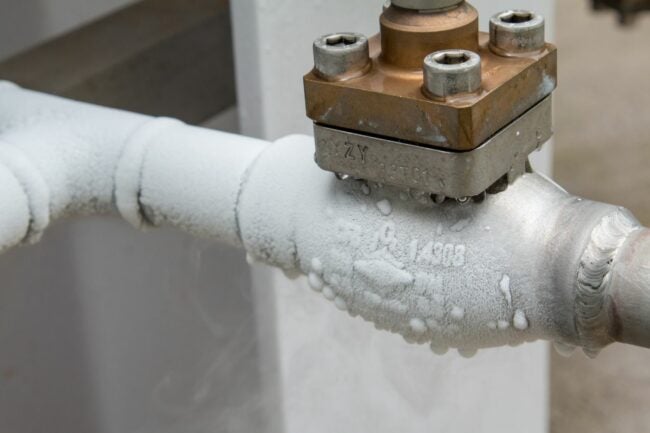 Homeowners insurance typically won’t cover pipes that have frozen as a result of homeowner negligence.

An essential part of the answer to the question “Does insurance cover pipes bursting?” is the condition of the plumbing when the accident happens. A homeowner agrees to keep their home in good condition when they get a homeowners insurance policy. This means taking care of the home’s systems—like plumbing—through regular maintenance. In winter, plumbing maintenance often means insulating pipes or keeping the heating system turned on to prevent freezing.

Homeowners insurance generally covers burst pipes, but not if the homeowner was negligent in caring for their home. For example, a homeowner might forget to turn on their heat when they go out of town for the winter, causing the pipes to freeze and burst while they’re gone. The insurance company could deny the homeowner’s claim due to negligence since an appropriate temperature was not maintained.

To prevent frozen pipes, homeowners can insulate them with pipe tape, foam sleeves, or another form of insulation.

Homeowners can add insulating products to their pipes to help reduce the likelihood of them freezing. Common insulating products include foam sleeves and expanding foam insulation. It’s typically recommended that homeowners insulate their plumbing before the temperatures start to drop. Since an early cold snap could cause a frozen pipe, it’s best not to wait until winter to insulate pipes.

Homeowners might wonder which pipes need insulation in their homes. It’s generally a good idea to start insulating pipes in areas with low heat such as attics, garages, and pipes against exterior walls of the home. Going through these spaces and insulating exposed pipes can help homeowners prevent them from freezing. 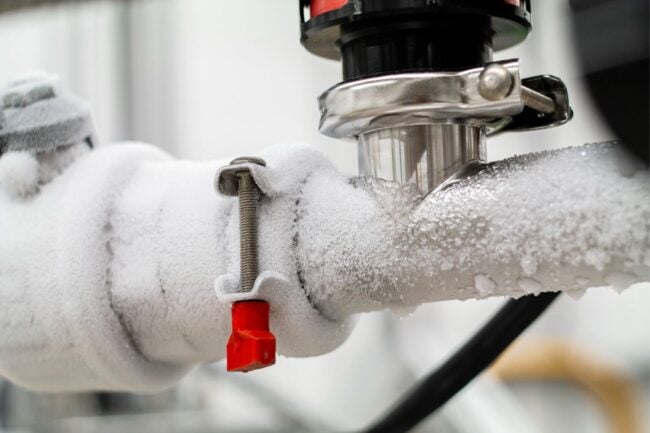 When leaving the home for an extended period, homeowners can make sure the thermostat is no lower than 55 degrees to prevent pipes from freezing.

If a homeowner fails to maintain the temperature, the insurance company will likely deny any frozen pipe claims. It might deny other claims related to freezing as well, such as damage to appliances or heating systems. Homeowners can prevent denied claims by checking their thermostats before leaving home in colder weather. In general, homeowners should keep the heat at 55 degrees or higher to keep pipes from freezing.

Winterizing a home can help prevent frozen pipes from occurring in the first place.

The winterization process involves going through a home and identifying places where heat can escape. For example, homeowners can use caulk or weatherstripping to fix leaks in exterior doors and windows. It’s also important for homeowners to remove hoses from outdoor faucets. With the hose gone, homeowners will want to cover the faucet with an insulating material to prevent cold from entering the plumbing system.

Winterizing a home doesn’t completely eliminate the chance for a frozen pipe. If a pipe still freezes, homeowners may be wondering what to do when pipes burst. Homeowners will need to turn off the water supply to their home as soon as possible. This helps prevent additional damage to flooring, furniture, and other belongings. With the water off, homeowners can then call their homeowners insurance agent. Their agent can usually give them recommendations on the next steps to take for fixing their burst pipe. Homeowners may also want to contact a water restoration company as soon as possible to prevent mold from developing and to fix any water damage to the home.

Homeowners will want to read their insurance policy carefully to determine exactly what is and is not covered.

The easiest way for homeowners to know what their insurance covers is to read their policy carefully. The policy should list the maintenance and heating requirements—if any—so homeowners won’t be surprised by claims being denied. If the policy seems unclear, homeowners may want to contact their insurance agent for specific answers.

I have tried to give all kinds of news to all of you latest news today 2022 through this website and you are going to like all this news very much because all the news we always give in this news is always there. It is on trending topic and whatever the latest news was

it was always our effort to reach you that you keep getting the Electricity News, Degree News, Donate News, Bitcoin News, Trading News, Real Estate News, Gaming News, Trending News, Digital Marketing, Telecom News, Beauty News, Banking News, Travel News, Health News, Cryptocurrency News, Claim News latest news and you always keep getting the information of news through us for free and also tell you people. Give that whatever information related to other types of news will be

All this news that I have made and shared for you people, you will like it very much and in it we keep bringing topics for you people like every time so that you keep getting news information like trending topics and you It is our goal to be able to get

all kinds of news without going through us so that we can reach you the latest and best news for free so that you can move ahead further by getting the information of that news together with you. Later on, we will continue

to give information about more today world news update types of latest news through posts on our website so that you always keep moving forward in that news and whatever kind of information will be there, it will definitely be conveyed to you people.

All this news that I have brought up to you or will be the most different and best news that you people are not going to get anywhere, along with the information Trending News, Breaking News, Health News, Science News, Sports News, Entertainment News, Technology News, Business News, World News of this made available to all of you so that you are always connected with the news, stay ahead in the matter and keep getting today news all types of news for free till today so that you can get the news by getting it. Always take two steps forward