Ciampa was always just looking for an opportunity to showcase his skills, which were on full display during the 8/1 “WWE Raw” episode.

By the end of the night, Ciampa had pinned both Chad Gable and AJ Styles to become the #1 contender to Bobby Lashley’s United States Championship.

After the show, Ciampa appeared on “Raw Talk” to discuss the biggest night of his main roster career. When asked to describe his emotions, he summed it up with one word – “Earned.”

Ciampa continued, “Dolph Ziggler, Chad Gable and AJ Styles [I beat them all].  I win,” Ciampa said. “I win. I’ve said it before, and I’ll say it again – all I need is an opportunity. And my opportunity comes next week.”

Although Ciampa’s upset win against Styles came thanks to outside assistance from The Miz, the former NXT Champion made it clear that he’s got all the tools needed to be a top singles star in WWE. During the interview, Sarah Schreiber referenced Lashley’s earlier comments about him not shying away from anyone or any challenge.

“Anyone – that’s what Bobby said,” Ciampa responded. “I heard what Bobby said. The problem is, I’m not anyone. I’m the greatest sports entertainer of all time. I am the blackheart, and the fact of the matter is, nobody makes a title more prestigious than the man you’re looking at. Bobby Lashley, enjoy your last week because as of next Monday, your new United States Champion.” 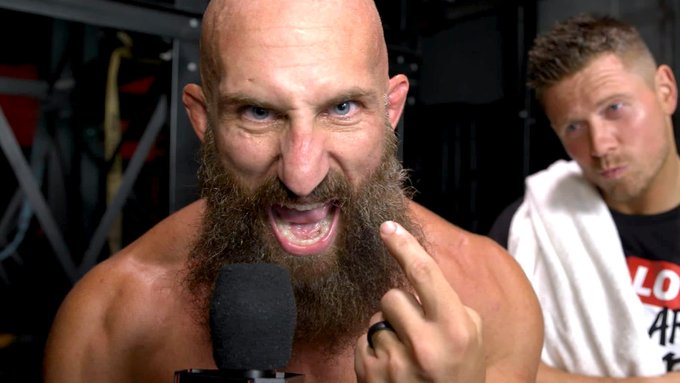 The Ciampa vs. Lashley title bout is now confirmed for the 8/8 episode of “WWE Raw” next week.

Ciampa’s sudden change of presentation, coupled with a winning streak, shouldn’t come as a huge surprise. Ever since Triple H took over as WWE’s Head of Creative, there has been chatter of The Game utilizing his former NXT Black & Gold talents more prominently on the main roster. Furthermore, a Fightful Select report Monday confirmed that Triple H has big plans for Ciampa going forward.

Have a news tip or correction? Send it to [email protected]