It’s not easy to reach Georg Goutrie on the phone. But between two night shifts and an early morning shift, the 21-year-old nurse finds a moment to answer. “What day is it? Sunday, right?” he asks with a laugh. For the past month, Goutrie has been working at the mother and child unit at Berlin’s Charite hospital. With over 3,000 beds, the university hospital is one of the largest in Europe.

Goutrie’s three-year training to become a nurse began right in the middle of the pandemic. During that time, he and other trainees experienced challenges most clinics around the country faced: Entire wards were shut down, with operations postponed and staff moved elsewhere to care for COVID-19 patients.

At his current post, Goutrie will likely be spared a similar situation. “My ward now can’t be closed. Babies simply arrive when they are ready, and you can’t put them at the back of the line.” For the time being, however, all patients are being handled as though they were positive COVID-19 cases: in isolation until they get a negative PCR test result. 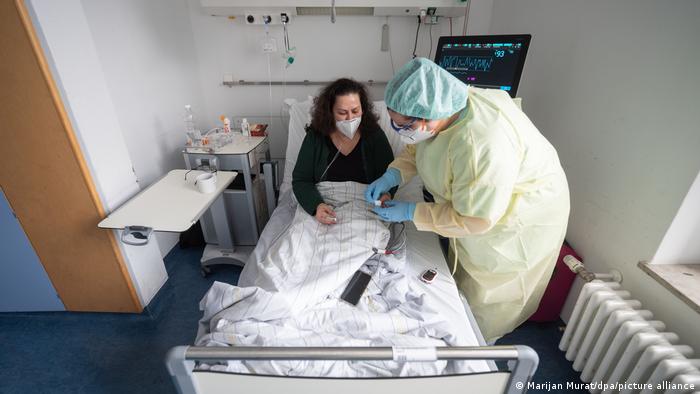 Many patients who are admitted to hospital, only then find out that they are infected with VOVID-19

Over the last two years, COVID-19 infections have dropped during the summer, when people spend more time outside. This has meant a reprieve for health workers during the warmer months.

But this year is different. Case numbers are rising even in summer and the health system is already approaching its limits, according to the Marburger Bund doctors’ association. While in early June the 7-day incidence rate was the lowest it had been all year, numbers have since spiked rapidly.

One explanation is the new BA.5 virus subvariant. Even more contagious than previous variants, experts say that it could spread rapidly well into summer. Those who have been vaccinated or already recovered from an omicron variant infection aren’t safe. Two-thirds of COVID infections are now attributable to the BA.5 subvariant.

The spread has been facilitated, as authorities have relaxed prevention measures. People in Germany are no longer subject to contact restrictions or mask requirements in most public spaces. Many are also traveling and attending events once again.

Free rapid tests have been abolished due to the expense. Health Minister Karl Lauterbach said recently that the service had been costing €1 billion ($1 billion) per month. Now people are required to pay €3 at test centers, with some exceptions. It remains to be seen whether this will discourage regular testing. 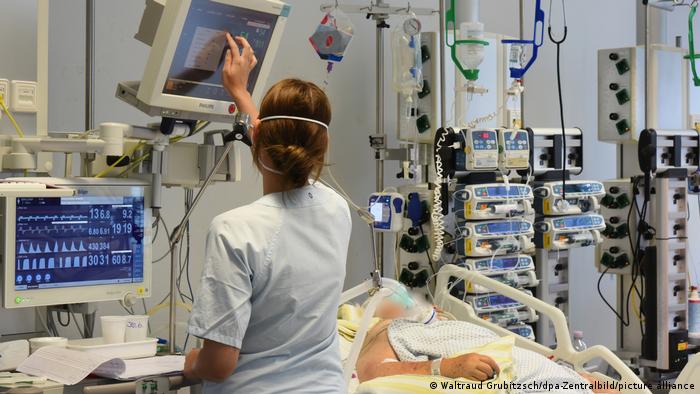 A familiar pattern is playing out for nurses once again. With COVID-19 numbers on the rise, they are concerned about fall and winter, when experience shows that infections will continue to multiply. One of the largest clinics in the northern state of Schleswig-Holstein already closed two sites at the beginning of July because too many staff were infected with the virus.

“We have already had to reserve beds due to the situation described above. And this in the middle of summer,” the hospital’s press office wrote to DW. “So we look with concern to the coming fall and winter.”

Too many patients, too much responsibility

But COVID-19 is not the decisive issue. The pandemic has highlighted the already precarious working conditions in the care sector, a problem that The Walk of Care initiative, in which nurse Georg Goutrie is also active, has been working to repair since 2016. It unites caregivers of all ages and ranks in a campaign for better financial and structural health care policies.

“In Germany, we average about 13 patients per nurse, while in Holland, for example, there are only five,” Goutrie says. “How am I supposed to take responsibility for 13 patients at once and still provide high-quality care?”

Nurses had already been working at their absolute limit for years in both outpatient clinics and hospitals, he stresses. Conditions hit women the hardest because they fill more than two-thirds of the nursing jobs throughout the country.

Those who suffer most can’t afford to rest after their paid caregiving ends because the unpaid labor of tending to children and dependents awaits them at home. Many also experience racism or sexism in the workplace, but struggle to find new positions, Goutrie says. 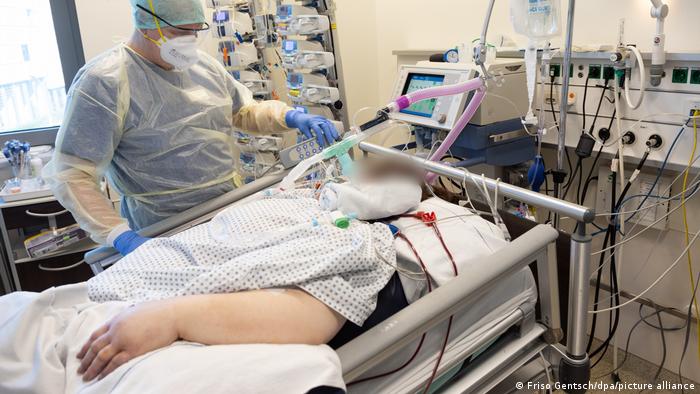 Half of all critically ill patients on respirators do not survive

According to the German Economic Institute, the country could see a shortage of around 307,000 nursing staff by 2035.

The problem has been steadily worsening for years. Conditions create physical and emotional strain, and understaffed teams often mean working overtime — on the lowest possible wages.

Anonymous reports by hospital personnel from across the country describe how this feels on a website called “Schwarzbuch Krankenhaus,” (Black Book Hospital). Health workers’ comments read:

“I didn’t even have time to care for the dying!”

“I love my job and I am very proud of it. But I am so shocked by the abysmal care in this facility that I couldn’t stand it for more than two years.”

“When I broke down crying in the ward, none of the other nurses had even a moment to comfort me.”

Such accounts reveal a wide spectrum of psychological distress. Burnout is a much-discussed topic in nursing. But there is also a phenomenon known as “coolout” that is becoming more common in Germany.

“It’s when you don’t care about anything. Nothing touches you anymore. It’s a state of complete overload. You take care of people in a state of emergency,” Goutrie says, adding that this leads to mistakes or even violence towards patients.

In June 2021, politicians vowed to make improvements, launching a nursing reform that came into force this year. It aims to alleviate the skilled worker shortage and job stress with better wages and more onsite decision-making responsibility for nursing staff.

But Goutrie is considering a career change, to maybe start something completely different, even if the idea pains him. “If you see yourself as a caregiver, it makes sense to go into nursing,” he says. “But at what cost?”

This article was originally written in German.

While you’re here: Every Tuesday, DW editors round up what is happening in German politics and society. You can sign up here for the weekly email newsletter Berlin Briefing.